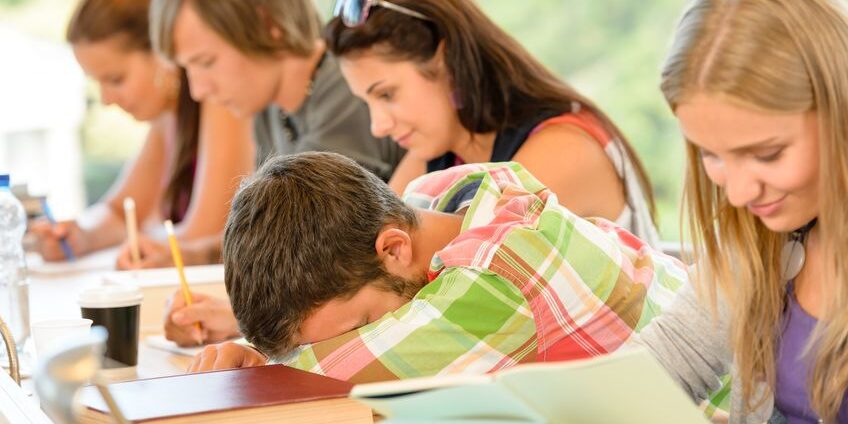 Any parent who has the responsibility to awaken a sleeping teenager usually has their hand full! In fact, most parents of teenagers will tell you that teenagers today just don’t get enough sleep.

According to the National Sleep Foundation’s Adolescent Research Report: Sleep Needs and Resource Guide and Patterns, “90% of parents state that their children are not getting enough sleep, while 60% of teenagers report extreme daytime somnolence”.

Teenagers generally stay up later than younger siblings, but sleep later as well, but this problem may also be due to early school start times because of the average school start time of 8:00 a.m. (and in some cases as early as 7:00 a.m.).  Therefore, teens are averaging about 7 hours of sleep per night which is a full two hours less than current research recommends[i].

According to Baroni, et. al [ii] if school start times were delayed just two hours, academic scores would improve. The National Assessment of Educational Progress (NAEP) math scale scores for eighth-grade students would go up as much as eight points if every school had a one-hour later start time. According to many education experts, this gain is equivalent to a full grade-level increase.

It is certain that there is a growing body of evidence suggesting that a good night’s rest helps students learn as sleep increases a student’s ability to focus and process information.  The effects of more sleep on student outcomes is both significant and scientifically documented.

Many schools have established standard 7:30 am to 8:00 am schedules to accommodate the transportation to school and busing schedules. More specifically, many school administrators arrange start times according to their districts’ busing schedules, or the times that school buses are available to pick-up and drop off students at various schools. Since school buses tend to run multiple routes in the morning for the different grade-levels, this forces some students to arrive at school earlier than others. Other reasons for early start times include concerns about after-school programs.  If a school starts late, then the school day ends late, and the associated after-school programs would end much later in the evening.

However, these early opening and dismissal times place a heavy burden on parents, particularly parents with traditional work schedules who must wake up several hours earlier than usual in order to get their children to school on time and leave work several hours early to pick them up. According to UCLA Health, these school schedules also do not match up with the established science that suggests that teenagers often stay up late due to hormonal changes (melatonin increases in the brain) rather than psycho-social motivations.

Over the past decade, many schools across the country have shifted their start times to provide better hours of learning for students and their families.

In Jessamine County, Kentucky, the superintendent moved ALL start times for elementary, middle, and high schools to after 8:00 a.m., irrespective of the transportation and busing schedules.

The Joaquin Moraga Intermediate School in California reports paying close attention to the sleep and health benefits of later school times and have changed their start times and schedules accordingly.

These schools provide evidence that better school schedules not only help parents but also support student success. In order to improve achievement outcomes for students, as well as the lives of working families, school leaders must rethink how early students start the school day.

Is there Anything Normal about Teen and Adolescent Sleep?

SleepEdu.org is dedicated to meeting the educational needs for professionals in the sleep medicine field. We provide online continuing education courses of a variety of pertinent Sleep related topics that are approved by the BRPT for CSTE credits (sleep medicine),  by the AAST for CEC credits (sleep medicine), by the AARC for CRCE credits (respiratory care) and by the CSRT for the CPD credits (respiratory therapy – Canada).  Understanding teenagers additional sleep needs, we offer the course entitled, “Sleep Across the Age Continuum: Is There Anything Normal About Teen and Adolescent Sleep?”

Our courses are written by Sleep Medicine and Respiratory Care Industry Leaders with relevant topics that are engaging.  All Courses are Peer and/or Physician Reviewed! Learn more about SleepEdu.org.