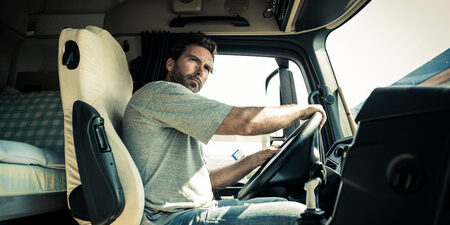 For many truck drivers and train operators, the adequate amount of sleep is vital not only for the effectiveness of their duties but to protect the lives of their other passengers. What is Obstructive Sleep Apnea and what are the current Federal regulations for OSA testing?

“Obstructive sleep apnea, or OSA, arises from what is basically a mechanical problem. During sleep the patient’s tongue falls back against his or her soft palate, and the soft palate and uvula fall back against the back of the throat, effectively closing the airway.  The result is when the sleeper expands the chest to inhale, no air enters the lungs.” – SleepApnea.org

The symptoms are serious especially if OSA is left untreated. It can lead to debilitating daytime sleepiness, morning headaches, depression, and a general sense of unwellness. This is especially worrisome for those whose jobs require precise mental alertness like truck drivers and train operators.  In time, OSA can lead to more serious health issues such as high blood pressure, heart disease, strokes, diabetes, and other life-threatening and life-shortening diseases.

What are the current regulations when it comes to OSA and transportation operators (for example truck drivers or train operators)? And what is being proposed?

But the National Transportation Safety Board (NTSB) does not feel this regulation is sufficient.  As a result, in March 2016, two Federal agencies within the Transportation Department proposed a rule that would have required truck drivers and train operators to be tested for obstructive sleep apnea. At that time, they concluded that when OSA goes undiagnosed or inadequately treated, it can cause unintended sleep episodes and resulting deficits in attention, concentration, situational awareness, and memory – and it would reduce the capacity to safely respond to hazards when performing safety sensitive duties. They further concluded that OSA has been linked to preventable accidents.

Unfortunately, the Federal Motor Carrier Safety Administration (FMCSA) and the Federal Railroad Administration (FRA) have since withdrawn that proposed rule, and concluded that “while OSA an on-going concern, the issue can be addressed through existing safety programs and rules“. The agencies stated that it should be up to railroads and trucking companies to decide whether to test employees. Surprisingly, one railroad already tests for OSA – the Metro-North in New York – and found that 11.6 percent of its engineers have sleep apnea!!

Why are New OSA Regulations being Proposed?

The decision to withdraw the proposed OSA Regulation was not well received by another Federal agency, the National Transportation Safety Board. The NTSB has been pushing for apnea screening and awareness, hence they publicly stated that it was disappointed by the move to withdraw.  Some recent studies and finding on the need for new regulation include:

Despite withdrawing the proposed regulation, just last spring the FMCSA and FRA themselves cited a number of cases of rail and trucking crashes that were linked to OSA in recent years including:

According to Dr. Stefanos Kales (Harvard School of Public Health), “Drivers with untreated obstructive sleep apnea who are non-compliant with treatment have a five-fold increase in the risk of serious preventable crashes.” Thus, both drivers and their companies have a legal responsibility to assure that anyone suspected of obstructive sleep apnea (OSA), or other similar condition, stays off of the road. It appears that for the transportation industry, the real question is if §392.3 is sufficient enough to protect the public – or if it will be enforced effectively. Stay tuned!

Our online continuing education video course prepared for Sleep Technologists and Respiratory Therapists provides answers to new perspectives in the diagnosis and treatment of OSA, associated co-morbidities, impact on partner’s sleep, and effective treatment options such as auto PAP, and surgery.  Psychosocial issues will be reviewed and travel with OSA is also discussed. This course is presented as a video presentation that runs 47 minutes.